How to implement Google’s ‘Plus Codes’ in Schema.org markup

What is a Plus Code ?

You may, or probably not, have noticed that Google have rolled out a new geo location code in Google maps. It happened very quietly recently-ish and is, according to Geospatial World, an initiative by a team of Google Engineers in Zurich to create an address system that could be used for the 50% of the world’s urban zones that don’t have street names. 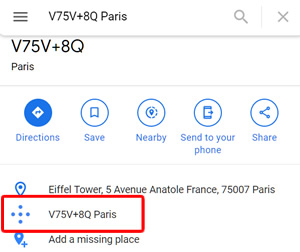 If you search in Google Maps for “V75V+8Q Paris” you will see the map centred on the Eiffel Tower and you’ll see this in the information panel on the left.

Apparently it has a precision of 3 metres by 3 metres and you can find out all about it on the Plus Codes Website and on the Wikipedia page about Open Location Codes.

It could seem a little superfluous considering the existence of Lat and Long, but as this is a purely Google initiative it would seem to make sense to put it in any Schema markup that Google can use to locate an organization or event.

How do you include the plus code in Schema markup ?

Since it cannot be inserted as an address – because it would be considered as a Mailing Address, which is not the case – nor as a “geo” value, the easiest way is to include it as an “additionalProperty” with a “sameAs” in order to identify it properly:

So there you have it!

My webinars at SEMrush

I'll be there with Jason Barnard and Aymen Loukil to talk about the importance of perception of site loading speed ... read more >